There are two main ways from Incheon Int'l Airport to the Institute for Basic Science (IBS): a direct Airport Limousine bus to Daejeon, and an Airport Limousine bus or subway (AREX) with bullet train (KTX) transfer at Seoul Station. The third option; a direct KTX route to Daejeon Station, was suspended in March 2018 and officially closed in September 2018 due to low ridership. The most convenient way to get from Incheon Airport to IBS HQ in Daejeon is to use a direct airport limousine bus to Daejeon, and we strongly recommend this method.

Terminal 2 at Incheon Airport opened January 18, 2018 and bus and rail methods mentioned above are available at both Terminal 1 and Terminal 2. Terminal 2 is effectively the SkyTeam terminal. It initially housed Korean Air, Delta Air Lines, Air France, and KLM Royal Dutch Airlines and later included Aeromexico, Alitalia, China Airlines, Garuda Indonesia, XiamenAir, Czech Airlines and Aeroflot in late 2018. The remaining SkyTeam members that serve Incheon Airport, including Vietnam Airlines, China Eastern Airlines and Shanghai Airlines, will relocate after Phase 4 construction is completed in 2020. Before arriving in Korea, knowing which terminal you will arrive in isn't necessary, but when you leave Korea it will be important as transportation between the two terminals is not very convenient. When your plane lands at Incheon Airport, just take note of which terminal you arrive at, as that will be the terminal you depart from.

If you need to get from one terminal to the other, you can take a free airport shuttle bus. Boarding is on the 3rd floor and located near Exit 8 in Terminal 1, and in between Exit 4 and 5 in Terminal 2. Shuttles come every 5 to 8 minutes, stop by the Hyatt Hotel in route from Terminal 2 to Terminal 1, stop by the Incheon Airport Fire Station in route from Terminal 1 to Terminal 2, and take approximately 20 minutes. Some but not all of the buses are low-floor buses which make them easier to board, but there is limited space for suitcases and travelers are expected to move their own bags. The Airport Railroad Express (AREX) also goes between terminals but is not free and the boarding location is located farther than the shuttle buses. More information on the AREX system is on the next tab as it involves the second method of departing from Incheon Airport. There is a maglev system, named the Incheon Airport Maglev, which will be an island-wide maglev in the future. Phase 1 of construction is complete and phases 2 and 3 are planned. Phase 1 does not go between terminals but transfer might be possible in the future when phase 2 opens. As of this writing, it is too early to say if and when a transfer to Terminal 2 will be provided.

Airport Limousine buses for Daejeon cost KRW 23,700 or KRW 28,500 for late night (early morning) hours. Tickets are difficult to purchase online or via smartphone as the process requires the Korean language and several different bus companies cover this route. Buy tickets for "Daejeon" and confirm tickets do not say "Daejeon S.W." as the route is slightly different. Travel time will take about 180 ~ 200 minutes. There is no bathroom on buses but you will get one 20-minute rest stop visit near the destination; both Daejeon bound and airport bound. If you need to use a bathroom before the scheduled rest stop, please show the following message to the driver asking him to stop at the nearest rest stop. Please note that it might be 10 or 20 minutes until the next rest stop as they are not very frequent. 죄송합니다. 화장실이 급한데 다음 휴게소에서 내려주세요. If you cannot wait upwards of 20 minutes, the driver might be able to stop at a smaller area to the side of the road within a few minutes. If you cannot wait, please show this message to the driver. 죄송합니다. 화장실이 급한데 내릴 수 있는 가장 가까운곳에서 세워주세요.


Once in Daejeon, get off at Doryong or Daejeon Government Complex (pronounced Jeongbu Chongsa) and take a taxi to IBS. Note: The Government Complex Bus Terminal has several locations and Daejeon bound buses and airport bound buses are at different locations. Please see the Daejeon City map further down to avoid confusion when you conclude your trip and return to the airport. Although Doryong is slightly closer to IBS, there are not many taxis available. Regardless of the bus stop you exit at, once in a taxi the distance is roughly 2~3 km, will last around 5 minutes, and will cost around KRW 3,000. The drivers covering this Daejeon route try to save time where possible. Some drivers will ask where you will exit the bus in Daejeon and require passengers to group their luggage under the bus by destination. Other drivers will only ask your destination as you enter the bus. And yet other drivers will ask (only in Korean) while they are driving if passengers wish to exit at the next stop and will skip stops if no one replies. If you do not understand the driver’s announcement, your stop may be skipped and drivers are not allowed to stop at locations between official stops. To save yourself some grief, we included a map, pictures, and the names of each bus stop in English and Korean further down this page. Regardless of the driver, when you are getting on the bus we suggest you visually show the driver the stop you wish to exit at.

Welcome to Daejeon. You’re almost at IBS. As the airport bus stops are confusing even for Daejeon citizens, we made this map to help you get to IBS, and then get back to Incheon Airport after your visit. The map should help you find your bearings, and the Korean names are written below in the key in case you get lost. Simply get someone’s attention, and point to the wording in Korean to get assistance. 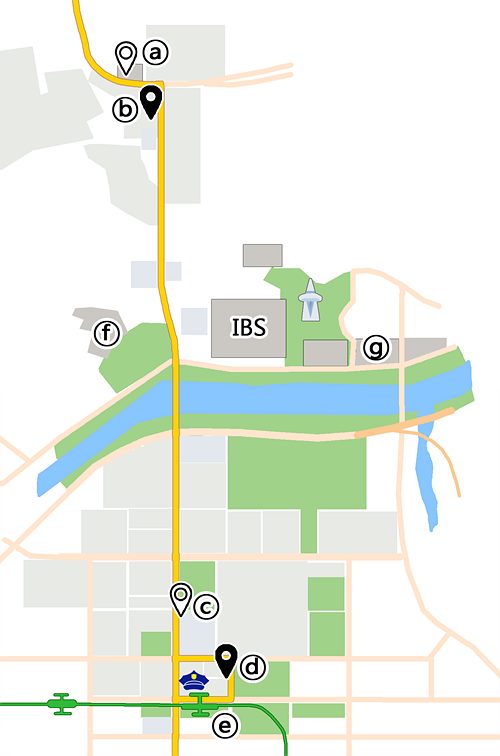 To avoid any potential confusion with a taxi driver, we recommend you say “hello” in Korean when entering the taxi (Ann-young-ha-say-oh) and then show them this note in Korean stating you wish to visit IBS.